Following my recent mad hurried knitting for a newly arrived babe, I did a quick audit of expected arrivals and discovered I had a lot of knitting to do quick smart! Another arrival came this week, there’s another due any minute, two more in May and another in August. And that’s assuming I haven’t forgotten anyone. With two of my own projects still on the go, it’s a case of too much knitting and not enough time! But you’ll get no complaints from me!

So, digging through my stash and armed with my husband’s trusting kitchen scales, I managed to find enough yarn to turn out these cute little multi-coloured versions of the trusty Composite by Pekapeka. More information on the pattern here.

I’m now eyeing off the last remains of my rainbow yarn and wondering whether there’s another Composite there. It’ll either be glorious or hideous. I guess the only way to find out is to cast on!

One of my two non-impending-arrival projects, is this Debbie Bliss dressing gown for W. I cast on for the 24 month size some time ago and was loving the smooth rows and rows of stocking stitch. More on that here. A nice easy in-front-of-the-telly knit. But as I got further into the project, I started to notice that the yarn was disappearing quicker than I expected. I quickly got online and emailed Loveknitting.com (the source of my yarn) to get my hands on some extra balls from the same dye lot. They emailed me to confirm they had two balls left. But, unfortunately, they are only able to take orders for specific dye lots over the phone. As they are in the UK and I am in Australia and I happened to notice the yarn deficiency on a Saturday morning, it was a long and painful wait until their phone lines reopened Monday morning UK time. In that time, somehow, someone else had got their hands on one of my balls. So when I phoned through first thing, I managed to only get the very last ball of the dye lot and praying that Debbie Bliss’s pattern can’t possibly be out by two whole balls, I kept on knitting.

As I started the first sleeve already using my second last ball, I was hopeful, but not optimistic. As that ball finished up, still several centimetres from the end of my first sleeve my heart sank. A quick stitch count and I realised I’d somehow ended up a stitch out.

Hoping that I could get both sleeves from the two balls if I just increased my tension a smidge, I unravelled the first sleeve and reknit it taking care to give just a tiny bit of extra tension to my work.

But, as I started the second sleeve, already on my last ball, I knew it wasn’t going to work. I knit on regardless. I needed to prove it to myself. I didn’t want to unravel the whole project thinking I didn’t have enough yarn. I needed to know.

But two thirds of the way into the last sleeve, with a disappointingly small ball trailing behind me, I pulled out the kitchen scales once more. I weighed the completed sleeve. 52g. I weighed the sleeve in progress with the needle and the remaining yarn ball. 48g. I weighed my other needle. 8g. No matter which way I looked at it. I had proof that I did not have enough yarn. I was trying to make a 52g sleeve with 40g of wool.

As I set about the task of rewinding balls from a fast unravelling project – much to the delight of W who watched the ball winder with intense fascination – the word “frogged” came to me. I recalled seeing it as an option on the state of a project on Ravelry. Finished. In progress. Hibernating. Frogged. This must be frogging, I thought. 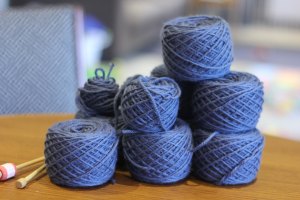 A quick Google confirms that frogging is a term for unravelling a whole project. Apparently derived from the action required. ‘Rip it’ sounds like a frog. I also discovered that to un-knit one stitch at a time, something I do rather frequently when my episode of Law & Order has been too engrossing and I’ve made a mistake, is called ‘tink-ing’. ‘Tink’ being ‘knit’ backwards.

So, feeling like I have truly joined the ranks of the hardcore knitters, having frogged a whole project and expanded my knitting vocabulary in the process, I have cast on for the 18 month old size and am praying that Debbie Bliss’s pattern can’t possibly be out by three balls.