There’s been a lengthy silence on this blog due to many factors—mostly the arrival of a gorgeous B at the beginning of April—but I’ve never stopped knitting! So we have some catching up to do. 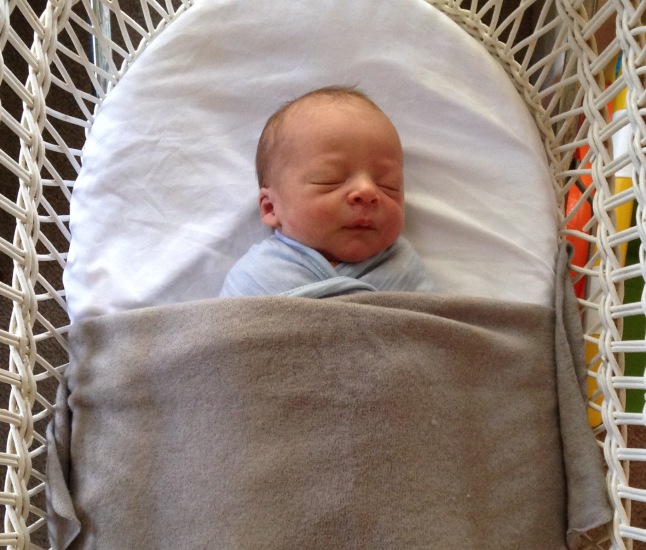 Master B. joined our family in April.

These scrumptious leggings were finished before B. arrived, but the weather is only just starting to cool down now and we finally got them on to W for a few photos this morning.

They didn’t start out so fabulous. Yet again, I failed to swatch (who has time, right?) and then I failed to convert US needle sizes correctly, so used a 6mm needle instead of a 5mm needle for the main knitting. I also failed to measure my child and guessed at a size.

By the time I reached the gusset, I realised I had knit a ginormous pair of pantaloons that could have just about fit me!!

Frogged. Whole process taking far, far longer than it would have to (a) swatch and (b) measure my intended wearer.

So, armed with a needle conversion chart printed and popped into my knitting organiser for future reference, and my measurements, I cast on again. This time, a gauge swatch!

After sorting out my gauge, I got on with it and turned out this lovely pair of leggings. Only hitch being that the yarn is a little scratchy on delicate toddler skin. A thin pair of cotton leggings underneath sorted that out and he’s played happily in them all morning.

Needle: Would you know after all that I didn’t write it down? Can’t remember what I ended up using! But you’ll be doing your own gauge swatch, right? 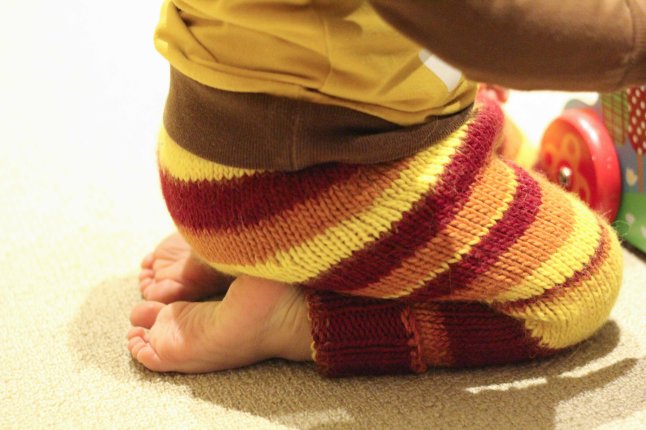 Designed with plenty of room for W’s cloth nappied bottom. They might sag a little sadly over a a slimline disposable.

The pattern is very well written, including photographs to help with some of the less common techniques, such as the double bum short rows. I still struggled a little with getting this to work, but I think that is more my issue than the author’s!

I also ran into issues when I used a knit front & back (KFKB) technique for my increases in the increase round immediately below the waistband. I failed to subtract the stitch I used for the KFKB from the stitch count between the increases, and ran out of stitches prior to the end of the round. Again, my issue rather than the author’s! If I’d used a ‘make one’ technique of picking up the loop between stitches—as implied by the instructions—all would have been fine! 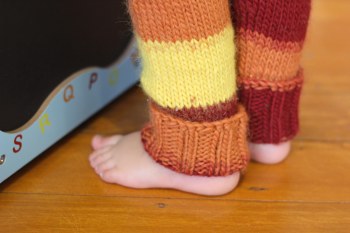 I knit them a bit long to allow for upcoming growth spurts. The cuff looks cute folded up in the meantime.

My other main failing was due to a lack of finesse in using a self-striping yarn. I should have rejoined for the legs ensuring that the rejoin was the same colour on both legs and ideally the same as the colour joining them on the gusset. I didn’t do either of these things, so there’s a small odd stripe on one thigh and a huge thick stripe on the other. And the legs are not the same. But, hey, they are loopy leggings!